As the first half of the college hockey season comes to a close, and players are preparing for exams, final preparations are being made for Team USA Military’s tour of Germany and Austria. This year the team will be made up of players from The Citadel, The United States Naval Academy and the United States Air Force Academy. They will be playing German D4, 5 and 6 teams in Baden Baden, Berchtesgaden and Freising, while also taking in the sights and sounds of Germany and Austria.

The players from the service academies were given some questions to answer, so that we may get to know the young men who will be representing our country. They were asked to provide their name, hometown, position, graduation year and any known plans after graduation. Also included were the following questions:

1 .What are you looking forward to on this trip?

With that out of the way, meet your Team USA Military hockey team, listed by Team USA jersey number.

# 3, from the USAFA, Ryyan Reule, forward from Devils Lake, North Dakota class of 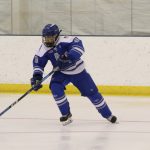 2021. “I’m looking forward to seeing the historic sites that Germany has along with what hockey is like in Germany. If I wasn’t on the trip I would be in Puerto Vallarta, Mexico celebrating the holidays with my family. Ryyan does not have anyone traveling with him but adds, “I’m excited to play on the same team with players from other service academies.”

# 4, from the USAFA, Justin Jung, defense from Glenside, PA, class of 2023. He is looking forward to “experiencing Germany with the boys from the USAFA and those from the other

academies. If not on the trip he would be “chilling at home with my friends and family.” Both of Justin’s parents are traveling with him. Justin also stated “ I’ve never been to Germany before, and I’m excited I am spending my New Years Eve there.” 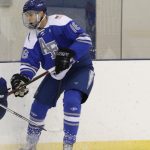 looking forward to “Playing some competitive hockey games and getting to tour Europe.” If not on the trip he would be “staying in Florida with his parents.” Luca does not have anyone traveling with him, but he added, “I’m really looking forward to meeting everyone and forming friendships that will last forever.”

#7, from the Citadel, William Coffey, defense from Manhattan Beach, CA, class of 2021. “I am looking forward to playing hockey with my friends and meeting new ones. I am 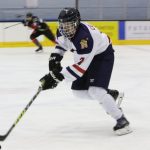 also excited to be learning about another country’s culture and history. If I wasn’t on this trip I would either be on the beach in California or playing pond hockey with my old friends back in Minnesota.” William does not have family joining him this year. William was on the trip last year and offered the following advice, “focus on hockey and let everything else happen as it does.” He also added, “I am excited to be going on the trip again with two other academies and combining to make a USA team to represent our country.”

#9, from the USNA, Tom McGowan, defense from Scituate, MA. 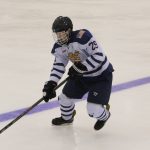 When asked about what he is looking forward to he said,  “Just about everything. This trip will be my first time in Europe and I am looking forward to learning about Germany and its culture while in country. Additionally, playing hockey at this level excites me and is an incredible opportunity. In high school I never thought I would continue my playing career as making the team at the Naval Academy was never a guarantee. Now, going to Germany and playing against pro teams is something I never thought possible, yet here I am. Lastly, being able to represent not only the Naval Academy and the U. S. Military, but the country as well on an international stage is an amazing opportunity and one I’ll be sure to never forget. Garret does not have family traveling with him and said that if not on the trip, “I would probably be spending time with my family, going to Pens games, and playing pickup hockey with friends. He also provided the following thoughts, “Playing hockey at such a high level will be a challenge, but one I think we will be able to rise to and even surpass.” 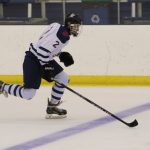 Garrett’s service assignment is as a Navy Pilot.  He had the following to say, “I am excited to play hockey in a foreign country and get to play with new people from other academies. If I wasn’t on this trip I would be home in Alaska skiing, snowmobiling and playing pond hockey with family and friends.”

#16, from the Citadel, Jarrod Gorczynski, right wing from Cincinnati, OH, class of 2023. 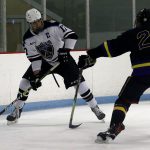 Jarrod is “looking forward to playing hockey against competition from another country. Also I am looking forward to exploring Germany.” If not on the trip he “would be staying at my house in Cincinnati while getting ready for the second semester of school.” Jarrod does not have anyone traveling with him on the trip. 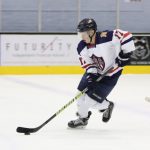 is looking forward to “seeing Germany and Austria for the first time, playing some good hockey, and the comedic value of Will Sheldon in a German bar.” If not on the trip he would “probably be at home seeing friends and family, and playing pickup hockey when I could. I don’t have any family traveling with me, but Garrett Hamilton and I could pass for brothers if we wanted to mess with people.” He passed on the following advice to the first timers, “Take some time and let it sink in. The people coming to these games and the players on the other teams don’t see club players from a military school, the see Team USA and they treat you accordingly on and off the ice. Getting to put on that jersey last year was the best moment of my hockey career, hands down, and I think anyone else that played last year would agree.” 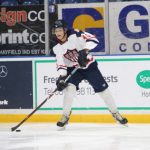 Andrew is “looking forward to being together with a good group of guys and exploring new places in Europe.” If not on the trip he would “be working on getting ready for next semester and working my part-time job.” His parents and little brother will all be traveling with him. “As a ‘second timer’, of the program, my advice to the new guys would be to enjoy every aspect of the trip. This team is not only about winning hockey games but experiencing new places around the globe that we would never be able to see if it weren’t for this team/program.” 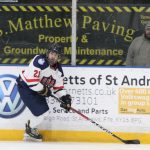 Beau plans on pursuing job opportunities in the Supply Chain Management field.  He’s looking forward to “seeing all the new things and places we’ll go. Haven’t had the opportunity to Switzerland, Austria or Germany.” If not on the trip he would be “hanging with family!” Beau has a good amount of family members from his Dads side of the family.  He had some advice for the first timers, “Enjoy every day, these opportunities don’t come often enough in life. Have fun and enjoy yourself.” Last but not least, he “can’t wait to get over there, enjoy some sights, and play some high level hockey!” 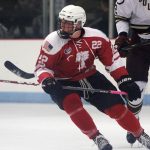 Tommy is “looking forward to making new bonds with teammates, from other schools, and having a great experience with my current teammates and friends from the Citadel.” If not on the trip, he would “be enjoying time back home with my family and friends.” His father will be joining him on the trip.

#25, from the USAFA, Nicholas Hastings, forward.

#27, from the USAFA, Jed Cutter, forward/right wing from Byfield, MA, class of 2021. Jed stated, “I’m most looking forward to getting to meet some new people. I’m excited to meet and be teammates with some other hockey players with the same goals and

ambitions as myself. I’m also excited to meet the teams we play out in Germany and experience their style of hockey.” If not on the trip, “I would most likely be hanging out with my family in Vermont watching my sister play hockey. She’s a freshman on the Middlebury Women’s Hockey team.” Jed’s mom, Gayle, and dad Mark will be traveling with him. Last but not least he said “Thank you to all the supporters and contributors that allowed for this trip to happen!”

states, “I am truly looking forward to not only the hockey, but the cultural immersion that we will be able to experience. Being able to interact with fellow hockey players across the pond is also going to be a pretty unique experience.” If not on the trip, he would “be in Sun Valley, ID skiing with my family.” Regarding family traveling with him, he states, “No, my family will be unfortunately staying in Sun Valley.” Will had one last thought, “I am really excited to drink some beer and play some hockey!”

#32, from the USAFA, Mark C. Annarumo, Jr, goalie from Princeton, NJ, class of 2021. Mark’s future plans include becoming an RPA Pilot or a member of security forces. He

is “mostly looking forward to meeting members of other military branches, especially those who we do not often get to interact with, such as the Citadel.” If not on the trip, “I would most likely be staying in the North East visiting family as well as helping to coach hockey for local teams I used to play for.” When asked about family members attending the trip he said, “Yes, I am very grateful that a majority of my family is able to come with me on this trip. This includes my Mother and Step Father, Father and his girlfriend, sister’s Julia and Abby, my brother Nick, and my Grandmother.” Mark also added the following, “I am honestly just looking forward to being able to represent the United States Military, especially the Air Force overseas, and am incredibly grateful to USA Military Hockey for selecting me to go on such an exciting opportunity to do what I love wearing my nation’s logo.”

Skyler is planning to go into law enforcement and is “looking forward to playing with my brother, Beau.” If not on the trip, Skyler would “probably be spending time with friends from back home.” He has family traveling with him, and he gave the following advice for the first timers, “enjoy playing every second and just have fun exploring the places we play.” Skyler also added, “Just looking forward to playing fun hockey.”

#96, from the USAFA, Gabriel Silva, forward from San Jose, CA, class of 2021. Gabriel states ,”I’ve never been outside the U.S with the exception of Canada, so I am most 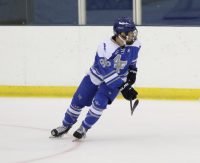 excited to experience another culture. Moreover, I’m excited for the opportunity to represent the U.S., U. S. Air Force and the Academy on and off the ice.” If not on the trip, he would be at home with his parents, and while he doesn’t “have biological family coming, I will be with my brothers in arms.” Gabriel also added, “I’m incredibly excited to travel, play hockey, and travel through Germany and other parts of Europe!”

Thank you to all of the players who participated in providing these answers.

All photos are by Don Haas, with several courtesy of the Citadel.